The currency of Papua New Guinea is made up of Kina (keena) and toea (toya) with 100 toea equal to One Kina.

Papua New Guinea Currency consists of the following in daily use.

The K50 and K20 Notes are displayed below the pictures of the K2 note.

This is a worn K2 polymer note still in daily circulation

The K2 note is made from a plastic polymer and it eventually rots away like an old plastic bag. It is made by the Royal Australian Mint using the same process as the Australian Dollar notes.

This one is in good condition

The One Kina coin has a hole in the middle. Unlike other countries the single Kina has always been a coin and not a banknote.

Commerative K5 and K10 mint coins have been produced and a Gold K100 coin exists but they are not in daily use.


The fifty toea piece is also used on commerative occassions and is used for normal street circulation.

The banknotes, like the coins, feature the Papua New Guinea Crest.

There are still traditional forms of money being used in PNG even today. One example is the Tabu Shell Money from East New Britain Province another is the Bagi from Milne Bay Province. 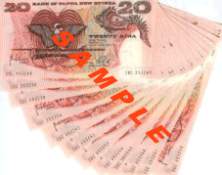 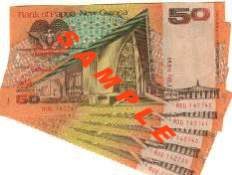